Appreciating Florence is taking the time to bask in her splendor. Whether its watching a sunset, strolling along the Arno, traversing her piazzas, navigating her narrow streets, admiring her treasures, or traipsing through her gardens, Florence continually surprises and delights us. Along with Mother Natures magicher light, her shadows, her clouds, her wind, and her seasonsFlorence captures our hearts.

Florence is a thriving city not only by what she created in the past but by what she continually creates every day. Not only does she exhibit her beauty; she keeps it alive by transmitting it to us through our senses and nestling it in our hearts. To see her many facets and appreciate them is to love her.

For weeks I watched a tractor inch along the riverbank to create an esplanade from Ponte alle Grazie toward Ponte Vecchio. Dust billowed up into the air after stones crashed onto the ground. While people have been walking their dogs or strolling along the pathway, I didnt find the right moment to amble along the Arno until this day.

As the sun was setting the other day, I descended the path from Terrazza Marasco to the Terzo Giardino where oleander bushes greeted me. I followed the trail to Ponte alle Grazie, where a stone wall towered above me. The sounds of the city faded and seemed distant.

My heart was racing when I arrived under Ponte alle Grazie. I had never stood below any of the bridges before. Normally, Im leaning over the metal railing to watch the water flow over the weir. I tiptoed on the dry spots and then rushed back to the path.

Excitement whisked me forward along the esplanade. The silvery shards of stone crackled under my feet while a cool breeze brushed past me, carrying with it the sweet scent of the Arno. When I reached the end of the pathway, water from a tributary trickled over the stones. I dropped my shoulders and breathed in the pastel-colored sky, the bright green grass waving in the wind, the Ponte Vecchio spanning the Arno, water lapping against the paths edge, and the Corridoio Vasariano towering above the brick wall.

Time seemed to stand still as I delighted in my surroundings. Before walking back, I took a video of the view as a keepsake. My plan is to return to the same spot when the inspiration to do so comes to me.

On my way to the Terzo Giardino, two bats swooped down, flying only a few inches from my head, to catch the mosquitoes encircling me.

When I arrived on Ponte alle Grazie, lights illuminated the Ponte Vecchio and the lampposts along the Arno flickered like candles on a birthday cake. I glanced at the esplanade where I was only a few minutes earlier and smiled.

I planned on arriving at the voting poll on Sunday at dinner time when most people would be eating. By the early evening, the rain had subsided. After the sun had set and the streets cleared, I headed out, marching down via dei Neri and turning onto via dei Benci. I tightened my cotton scarf around my neck after a burst of cool air surprised me. 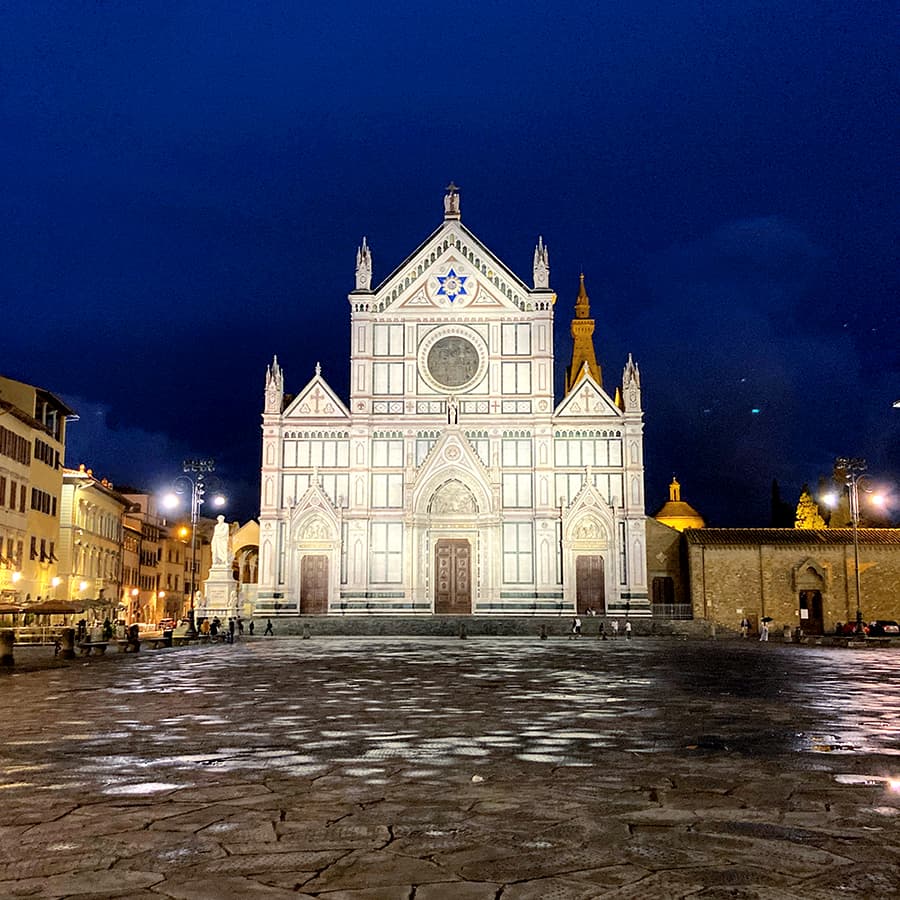 As I rounded the corner before Piazza Santa Croce, I gasped. The Basilica di Santa Croce was so riveting that I stumbled on the uneven pavement. With my hand on my chest, I breathed in the bright facade as it contrasted with the royal blue sky. Crossing the piazza, I caught glimpses of the puddles reflecting portions of the basilica.

Making my way around Santa Croce, I entered the elementary school on via San Giuseppe. A man at the top of the stairs pointed me to my assigned room where I voted.

I hadnt realized how quickly I voted until the same man, still standing at the top of the stairwell, turned around and looked at me with surprise. È stata un lampo.

I didnt think I was that fast since the two ballots were each on oversized pieces of colored paper. One for the regional election and the other for the referendum. I only had to select one political party along with one man and one woman from the same party. It was optional to select the head of the party, but I did that too. Basically, I had to make five Xs, fold the two map-like ballots, and slip them into the correct cardboard box.

When I walked back to the piazza, more people had arrived and were sitting on the stone steps next to Dante. My stomach grumbled as I caught whiffs of garlic and grilled meat from the plates of those eating on the restaurant terraces.

As I approached the edge of the piazza, I turned around to admire Santa Croce. The sky had become almost black. I was happy to have paused for a moment to admire the basilica during the blue hour. Initially, I thought of admiring the basilica afterwards, but it was just too captivating to not stop for a moment to bask in its splendor.

Santa Croces noon bells reverberated off the buildings in via dei Neri. When I crossed Ponte alle Grazie, their music filled the crisp breeze with celebration. Enjoying the warm rays of sun on my face, I took my time getting to Giardino Bardini. After the rain weve had these past couple of days, I was eager to revel in the beginning of autumn. 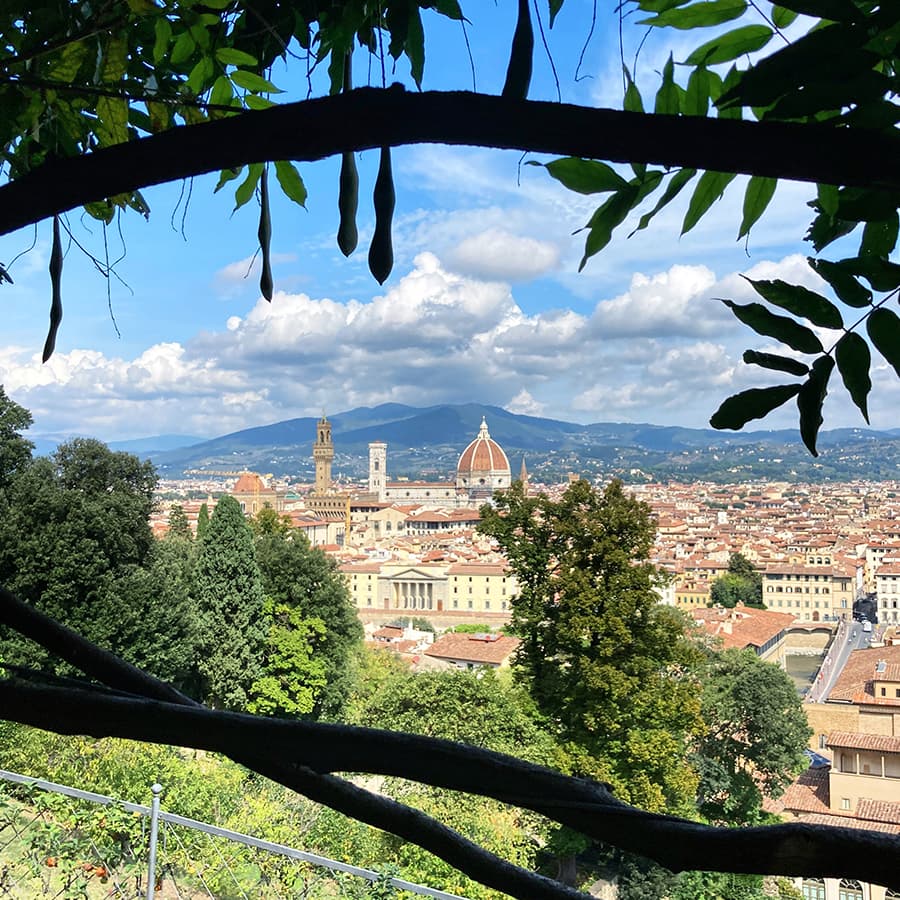 Hiking up the wide gravel pathways, I inhaled the sweet scent of humid soil mixed with dry leaves scattered on the ground. The sun highlighted the golden pears and red and green apples hanging from the trees. Some fruit was so ripe that it had already fallen and landed in the tall blades of grass.

Two wood pigeons were pecking at the dirt while bright orange butterflies crisscrossed paths in search of flowers. I chuckled as two lemon-colored ones twirled above the dandelions as if they were dancing.

Standing under the pergola where the glistening wisteria vines waved in the wind. The crisp breeze tossed a few wisps of my hair in my face and bounced tree branches up and down. A few of the wisterias leaves had turned yellow, highlighting the long pods hanging down like Christmas ornaments.

With one foot resting on a large gray stone, I smiled at the city stretching out to the hills defining its limits. Fiesoles bell tower, nestled between two low peaks, reached up to sky almost touching the clouds. Taking in the view allows me to not focus so much on the details and instead embrace all of Florence with one slow breath.

After the church bells rang, I strolled behind the pergola to navigate the olive trees one by one. The sweet scent of autumn encircled me. My mouth watered when I spotted a handful of deep purple olives as I thought about the future harvest of olives to make olio nuovo.

Without a cloud above me, raindrops fell from the sky. The pitter patter of the water splashing on the leaves filled me with glee. The cool drops stuck to my skin as I meandered around the olive grove to reach the pergola. I tiptoed down the gravel path to the exit, sniffing a few wet roses and allowing the rain to kiss me.

I woke up this morning thinking about the Giardino delle Rose. Gardens are sacred spots where Mother Nature lavishes us with love, asks us to step into this present moment, to admire our surroundings, and to listen to our hearts whispers. Every garden nudges us into our hearts where we can thrive. 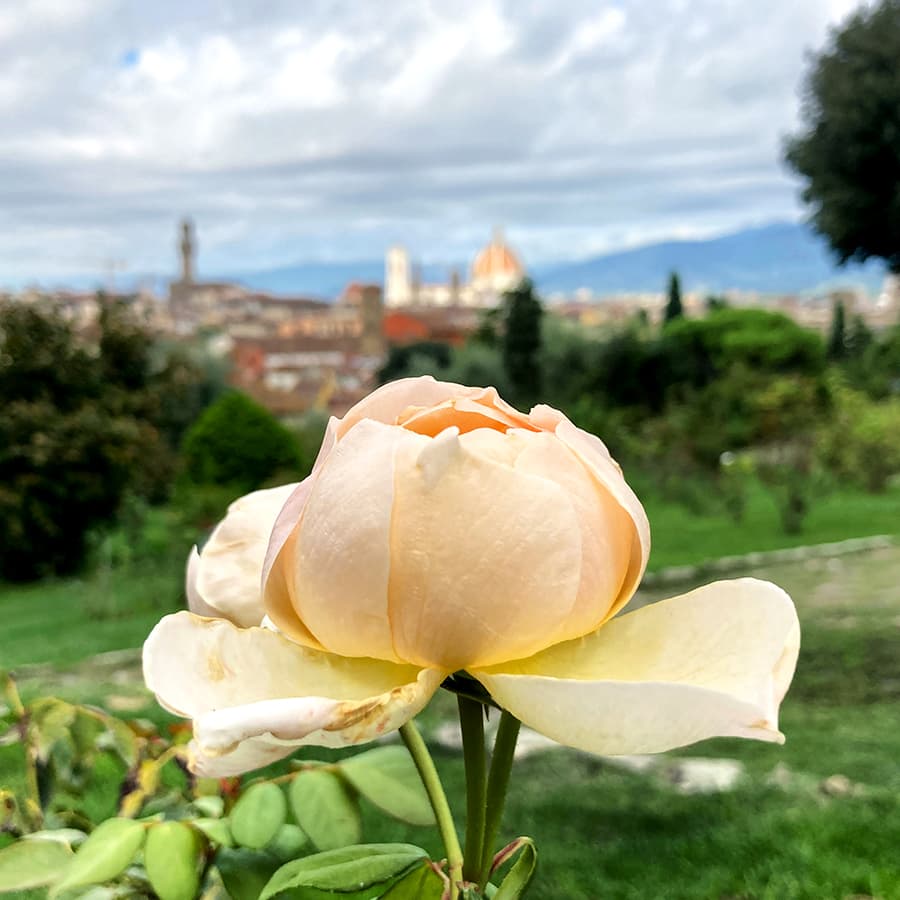 Navigating the garden, my path was like that of a butterfly, floating toward one rosebush and then to another. My heart raced every time I spotted the sprinkling of yellow, pink, and white roses in bloom. The red leaves sprouting on the rosebushes filled me with hope as they signaled new rosebuds to come.

I hiked up the misshapen stone slabs with grass peeking through the cracks to return to a rosebush I kept looking at wherever I was in the garden. Stepping up to the lawn, I focused on a pale orange rose. Tiny geckos wiggled through the tall blades of grass, but did not deter me from my path. I placed my nose on the roses velvety petals and inhaled. Its sweet lemony scent softened something inside of me, making space for more love and beauty to enter.

I admired the rose from every angle, leaning toward it to sniff it yet again. My body relaxed as I tuned into the water in the fountain, softly trickling onto the lily pads. One couple strolled past me to admire the panorama, the garden, and each other.

At 12:30 p.m., the sun grazed the city, spotlighting the Duomo for a few moments. As I took a photo, Santa Croces bells sounded first while San Miniato al Montes chimed in afterwards, and the Campanile di Giotto resounded one gong.

Before exiting the gardens, I leaned toward my rose and closed my eyes. Three long breaths to savor its perfume, which entered my body and permeated throughout like an embrace from the inside out. With each inhale, my heart expanded.

Basking in the view of a single rose with Florence in the background, a wave of gratitude flowed through me. Not only did I feel a greater sense of appreciation for Florences creative achievements, but also for her spirit. I felt the beauty she holds inside as much as the beauty she presents us with.