What I love most about living in Florence is being able to commune with her as I run errands, stroll along the Arno, or visit the gardens. Every moment in Florences embrace is an opportunity to experience her beauty to the fullest.

In my latest anecdotes, I delighted in spotting the Duomo at the end of a one-way street and took a detour to admire her up close. One afternoon, I perused the Giardino delle Rose and enjoyed a view of the city from the scalinata as I was leaving. On two different evenings, I caught the sunset from Ponte Santa Trinita and Ponte alla Carraia. To marvel at such beauty and to feel it permeate your heart is a treat.

On my way to get home before sunset, I rushed down Borgo Pinti where the sun had set hours earlier. I stopped when I reached the red light at the end of the road. With no cars coming from the left, I zipped across. Before stepping onto the sidewalk, I slowed down to a stop. One woman scooted around me, grazing my backpack to dash across the street. As I looked down via dellOriuolo, I couldnt help but stare at the Duomo glowing from behind the buildings.

Instead of passing through the Arco di San Pierino, I ambled toward Piazza del Duomo. My pace was as steady as my heartbeat. The wispy clouds painted by the golden light above the cupola filled my heart with joy.

I waited for a group of teenagers to shuffle by before reaching into my pocket for my iPhone. As I heard a car approaching, I teetered on the edge of the sidewalk and snapped a photo. When I took a second picture, the cars red hood flashed on my phones screen. I muffled my laugh as a gust of wind swept a few strands of hair into my face.

Making my way past shops selling artwork, old books, and antiques, I watched the cupola shrink behind the buildings on my right. Before I arrived at the stop sign, the Campanile di Giotto appeared like a lighthouse poking out of the water. Standing at the corner of via del Pronconsolo, my eyes delighted in the white, green, and pink marble structure with its narrow stained-glass windows, terracotta dome, and gold sphere with a cross on top.

I tried to fill up my eyes with the cathedrals white, green, and pink marble. My eyes grazed its narrow stained-glass windows, its terracotta cupola, and its gold sphere with a cross on top. While admiring the Cattedrale di Santa Maria del Fiores intricate details, I realized her name is perfect. With her roots nestled into the ground, she soared up to the clouds and blossomed into a flower that emanates Florences essence.

Spring is the season of love when nature thrives. Its passion fuels every wildflower, tree, and blade of grass to reach for the sky. I hiked up the stone pathway behind two women with wool jackets balancing on their arms. One woman hopped onto the grass and found a spot between two leafy rose bushes. The other woman tossed her jacket to the ground, avoiding the buttercups, daffodils, dandelions, and daisies, and sat down. 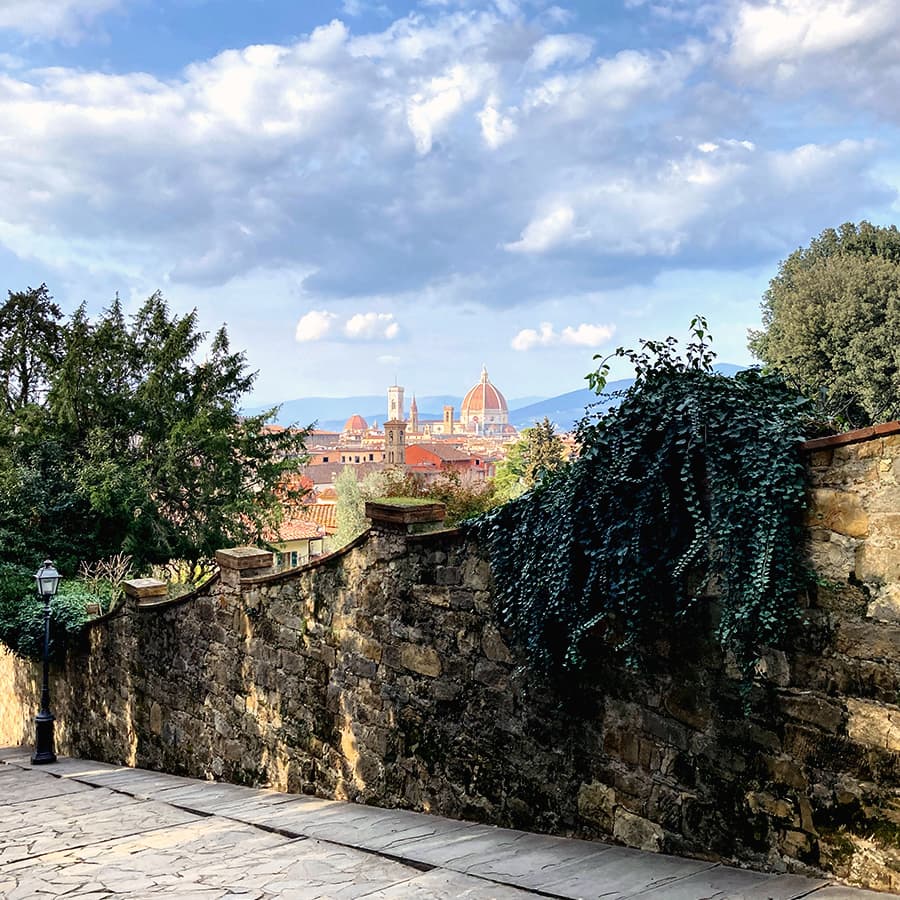 Almost eight blankets, placed on overgrown grass, hosted visitors soaking up the sun with their eyes either closed or in a book. Picnickers nibbled on their panini wrapped in noisy wax paper and sipped drinks in plastic cups. Birds from the trees encircling the area muffled the low voices with their sweet melodies. One couple made me sigh as I noticed them immersed in each others embrace.

As I continued to march higher up, three white butterflies did pirouettes in the air while two geckos wrestled on the path behind the silent fountain. I sat down on the cold stone that border the grass. The luminous sky funneled the clouds north, allowing streaks of pale blue to appear and letting the sun take center stage. When I surveyed the view, my heart expanded. As I inhaled, I widened my vision and embraced the energy pulsating around me.

I lifted my shoulders when a cool breeze swirled the vibrant scent of spring. The lime green grass emanated waves of joy, and the rose bushes a steady stream of love.

Before leaving the Giardino delle Rose, I strolled up to the grounds behind the gardeners two-story house. As I admired the snow-capped mountains hovering above Florence, warm rays of sun permeated my skin. I closed my eyes and listened to the faint sounds of the city.

Instead of exiting at the bottom of the garden, I wandered down the empty scalinata. After each broad step, I reveled in the view beyond the stone wall brimming with bushes.

I closed my eyes when I reached the center of Ponte Santa Trinita. Wanting to feel the sunset before looking at it, I breathed in the sweet scent of the Arno first. When I opened my eyes, dark clouds positioned like horizontal curtains unveiled a sliver of pale-colored sky. 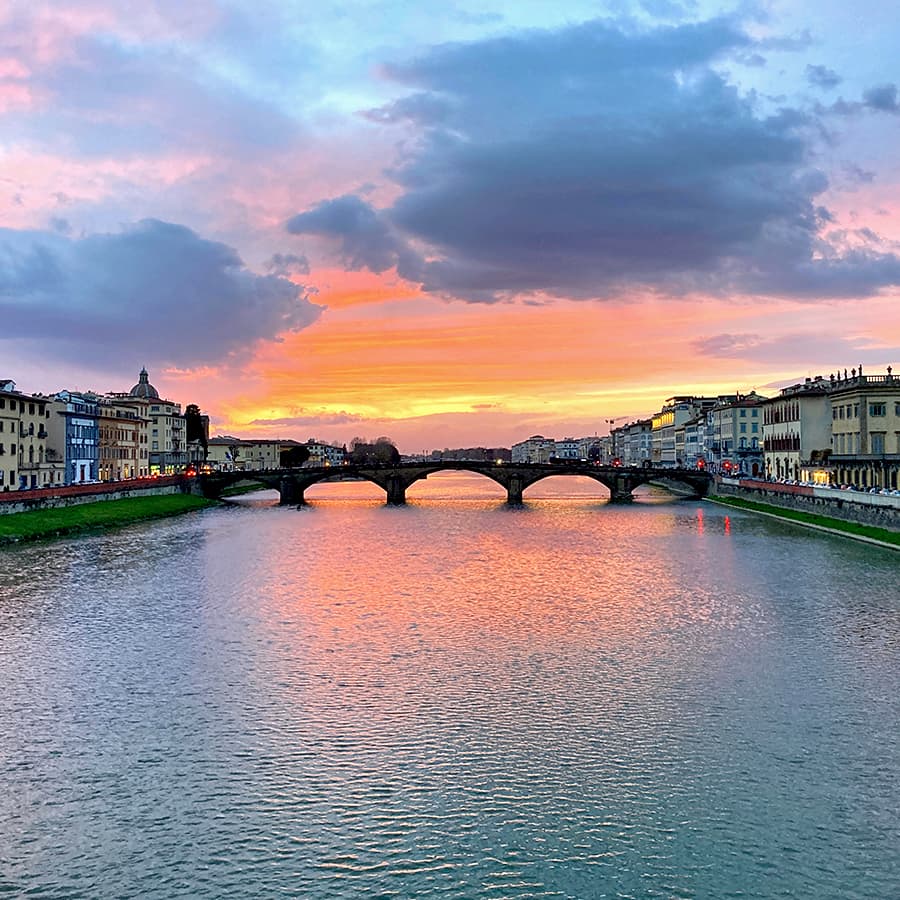 Everything and everyone around me fades away when I watch the sunset from Ponte Santa Trinita. I feel at one with Florence when I gaze at the sky as the sun slides down it. My heart expanded as I took in my surroundings: the veil of clouds overhead, the buildings lined up along both sides of the river, the bright green grass bordering the water, Ponte alla Carraia in front of me, and the Arno below me.

The steady winds created a choppy surface on the dark green Arno. When I spotted a canottiere pop out from under Ponte Santa Trinita, a wave of glee fluttered through me. The rowers oars sliced through the water and advanced the boat as he pulled them back. I pushed my back my hair and stared at Santo Spiritos bell tower as it rang six times.

One light brown bat flew around in circles above the Arno, whooshing a few meters in front of me. As the sun was setting, two others joined him. 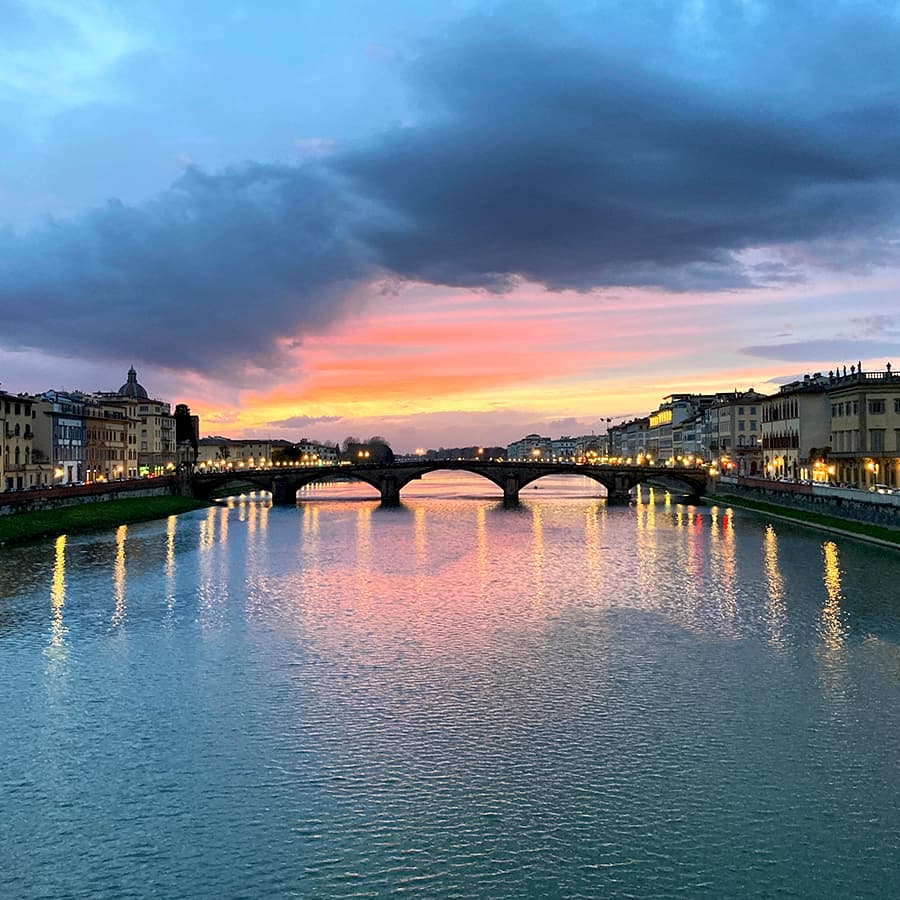 The colors warmed up as the temperatures cooled down. The sun kissed the buildings along Lungarno Corsini for a few moments, spotlighting them with brilliant rays of light, before it dropped behind San Frediano in Cestello. A golden band draped across the horizon extended the orange, pink, and lavender hues through the clouds while a pastel-colored glow appeared on the Arno.

The sunset first infused me with anticipation and joy, and then with tranquility. The subdued colors, the gentle wind, and the soft whispers of the city embraced me as the day ended.

After the lampposts and streetlights came on, I bid farewell to the day and made a wish for tomorrow. May my heart stretch itself open a little more to experience even more of the beauty surrounding me.

The sky was not promising when I reached Lungarno Diaz, but I continued my stroll toward Ponte Santa Trinita, hoping to glimpse tonights sunset. After passing by the Ponte Vecchio, the sun peeped over the rooftops like a golden ball of fire. 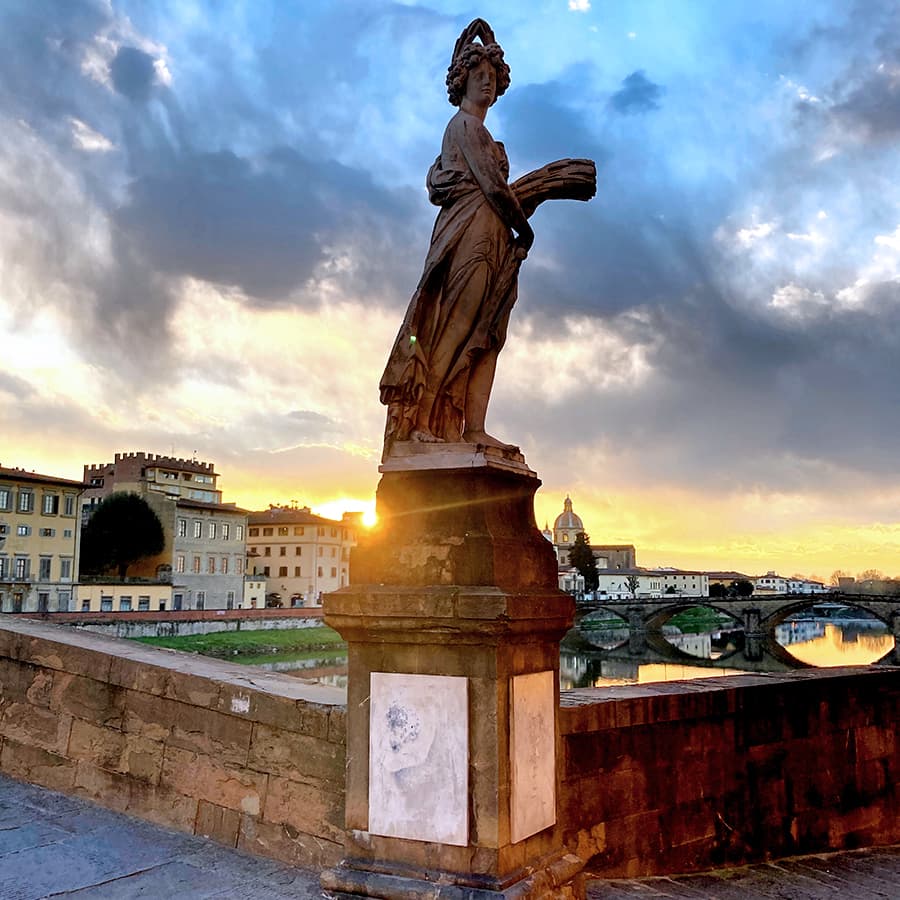 I dashed down Lungarno degli Acciaioli, zigzagging around large terracotta pots on the sidewalk and people strolling to and from the Ponte Vecchio. A womans heels clacked on the street behind me at a steady pace. Couples and small groups lined the sidewalk above the river, convening next to the lampposts.

Instead of going to my favorite spot on Ponte Santa Trinita, I stopped in the middle of the intersection and admired the Estate monument on the bridges north-west corner. The sun blazed at her feet, blanketing the horizon with gold. My heart melted as I observed her surroundings: the wispy gray clouds above her, the colorful buildings behind her, the glossy river, and the glowing sky at the horizon. I took in a deep breath and then sighed before hopping onto the sidewalk.

To watch the sunset, I continued down Lungarno Corsini toward Ponte alla Carraia. Every so often, I peered over the brick wall and gasped at how crisp the skys reflection was on the Arno. 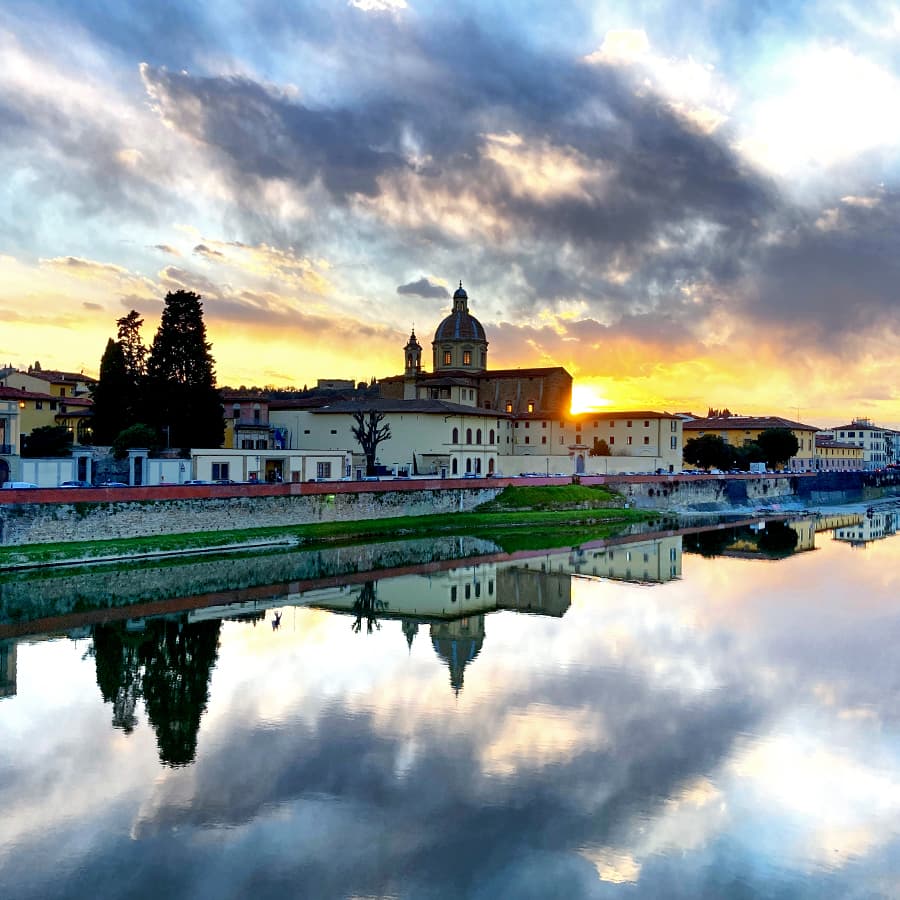 I kept my eye on the sun as it tucked itself behind San Frediano in Cestello. Rays of light shot up into the sky and through the domes windows. I inhaled the cool puffs of wind eking by me as I stood on the bridge.

As the sun inched its way behind the church, it glowed orange, radiating its light as far and as wide as it could. Even though the sky was the color of faded blue jeans, the gray clouds turned purple and the white ones became pink. A sliver of the moon, adorning the sky, filled me with delight.

After the sun bid Florence farewell, I headed home. When I passed alongside Estate, I looked up at her and smiled.