As we turn the corner into spring, the days stretch out and the sun gains strength. Clouds come and go, but the city is becoming brighter. More people arrive every weekend to visit Florence and revel in her beauty. To savor a moment is to live an eternity: strolling through the gardens, watching a sunset, and basking in the blue hour. As time flutters by, I enjoyed pausing to breathe in specific moments and relish them.

The sunlight glowed in the lampposts along the river. Santa Croces bells chimed as my long exhalations trailed behind me. The chilly wind enlivened my body and uncluttered my mind. Streams of sun-kissed air lightened my steps toward Giardino Bardini. Under the moons faint silhouette in the milky sky, I enjoyed the muted colors of my surroundings. 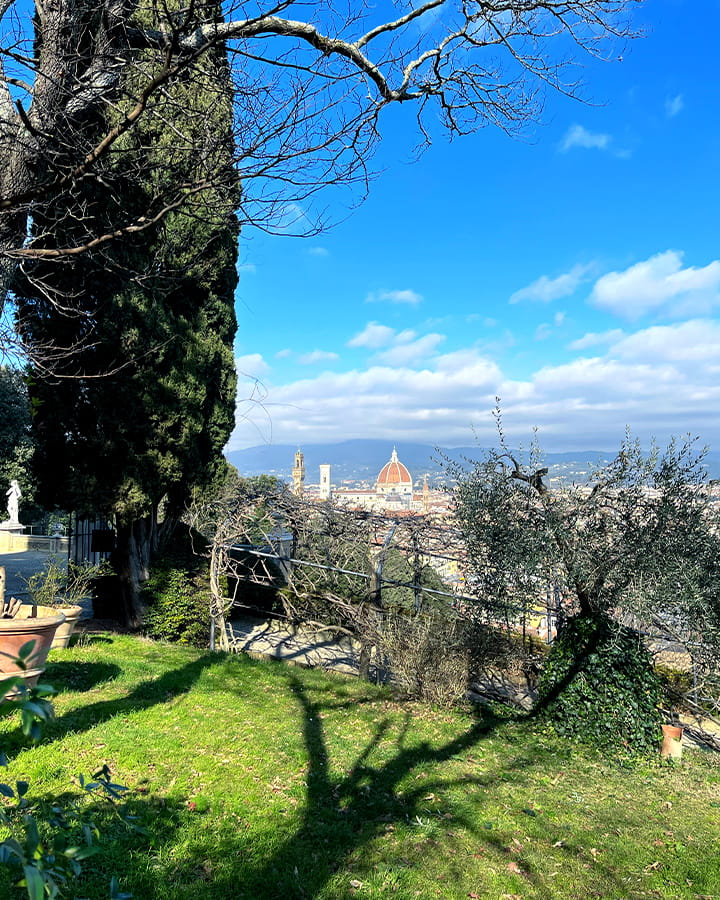 All morning I had looked forward to going to Giardino Bardini. Every few days, I visited them to see how nature has been building up her strength to prepare for spring.

Hiking up the incline where rosebushes clung to the stone wall, I gazed at the panorama. New leaves sprouting from the thorny branches announced the future of colorful roses. A shallow fog drifted across the hills around Fiesole while ripples in the clouds hinted that the blue sky would soon reign.

Under the pergola, the stubby vines of the glicine (wisteria) criss-crossed along its structure. A smile stretched across my face as I caught sight of the tiny green and yellow leaves that the Hydrangeas bare branches produced.

My heart nudged me to go directly to the olive grove instead of pausing after reaching the terrace. Frost crunched under my feet as I walked on the wilted grass weighed down by dewdrops. Meandering around the olive trees, I inhaled the soils fertile scent. Dove pigeons pecked at the ground as they looked for food.

Walking toward the terrace, I scoured the camellia bushes peppered with tight buds, not yet showing their color. When I spotted a bright red camellia tucked behind a bunch of thick green leaves, I lifted the branch to revel in its perfection.

After circling the gardens winding paths, the Campanile di Giotto chimed once. With my feet on the grass and my eyes on the Duomo, I welcomed Florences heartfelt embrace with every breath.

The magic of this evenings sunset continued to delight me as I walked down Lungarno Acciaiuoli toward the center. People meandered down the road as bicyclists zipped around them. A few individuals stopped along the red brick wall to take photos. On the Ponte Vecchio, the warm glow of the storefronts gave the walkway a festive vibe. 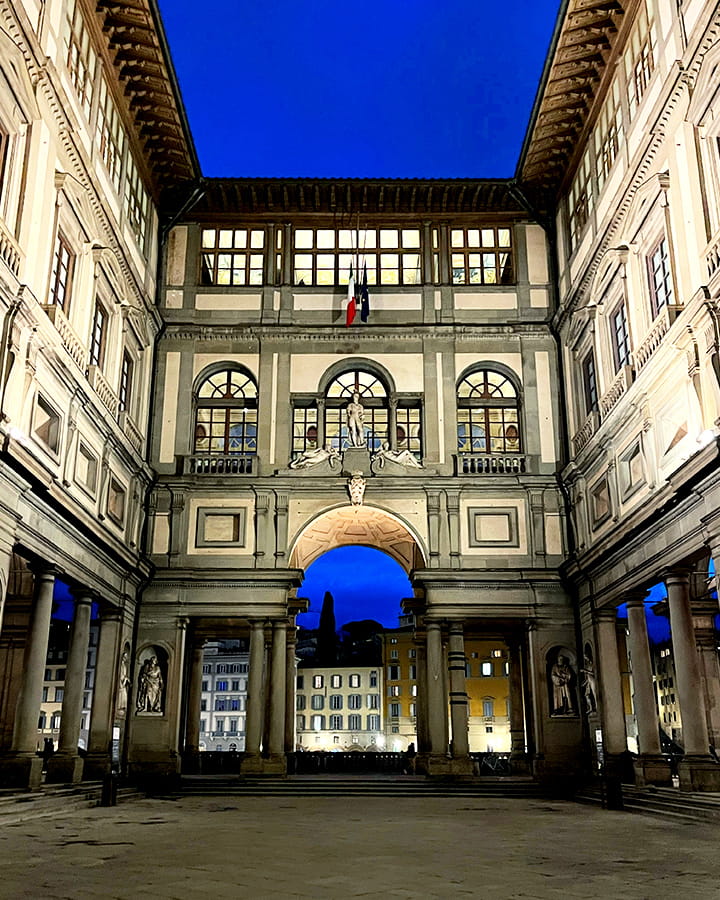 I smiled at the small crowd that gathered near Cellini. One couple stood cheek to cheek to catch the sunsets final moments, staring at the strip of lively colors outlining the horizon.

Without a single free space along the stone barrier, I remained in place to absorb the ambience. To my left, San Miniato al Monte glowed above the Ponte alle Grazie; to my right, the Ponte Santa Trinita where I watched the sunset; and behind me, the top of the cupola peeked over the rooftops.

Returning to Lungarno degli Archibusieri, I took one slow step at a time below the Corridoio Vasariano. At every opening, I glanced at the mellow Arno reflecting the lights above it. The dim sky was turning blue by the minute. The dark gray clouds, lingering above, infused me with tranquility.

Taking in deep breaths of the crisp air from the river, I felt refreshed. Instead of continuing along Lungarno Anna Maria Luisa de Medici, I ducked under the arches of the Uffizi. The street artists had already packed up for the day.

When I reached the military guards, standing next to their tank, I turned around. The vista surprised and delighted me. In the museum, visitors were milling about. A small group approached me from behind. Their voices becoming louder until one young woman rushed alongside me. They encircled her while she took photos of the view.

My eyes scanned the Piazzale degli Uffizi and filled up on its grandeur. I whispered the names of the statues one by one, thanking them for being a part of Florences history. After inhaling the sweet scent of dusk, I rounded the corner of via della Ninna and looked back one last time.

As soon as I entered the Giardino delle Rose, the scent of spring bounced in the cold air. A mix of damp soil, fresh new leaves, and life about to burst forth. Every splash of color grabbed my attention: miniature daisies poking out of the lawn and solitary purple flowers blossoming close to the rock wall.

I took in a few deep breaths to absorb Mother Natures energy. That dynamic pulse that emanates from each leaf, tree, flower, bird, bee, and blade of grass to create more beauty to enjoy.

Three gardeners pruned the trees and bushes, making way for the new to come. One man filled the stone wall with dirt where the weeds he removed had left behind holes. Birds chattered among themselves inside the shrubs.

An elderly couple slowly meandered up the uneven path behind me. Every few minutes, they turned around to enjoy the view. I hiked up the steps toward the upper garden. As I passed under a flourishing mimosa tree, I reveled in how its golden flowers enlivened the pale blue sky. Purple rosemary blossoms added their flair to the green terrain.

I paused alongside the empty trellis near two rose bushes, named after Helen Keller and Auguste Renoir. My silk scarf swayed from side to side in the gentle breeze. The shadows of the bare rosebushes on the uncut grass uplifted me. Last years roses had disappeared and new ones were about to arrive.

The moment I spotted the Duomo above the olive trees, my heart softened. Even though I see it all the time, San Lorenzos cupola felt important today. Its sometimes unbelievable how one family reigned for centuries to transform Florence, humanity, and the entire world. They not only created beauty, they nurtured it into being and shared it with us all.

After I exited the gardens, I headed up to Piazzale Michelangiolo. As I scanned the cityscape, my heart embraced it. Waves of gratitude engulfed me as thoughts of the Medici family and especially Anna Maria Luisa de Medici popped into my mind.

As I stood at the center of Ponte Santa Trinita, a chilly breeze grazed my face and flung my hair back. The cool scent of winter infused the air. Even though the sun dominated the blue skies for days, spring has not yet arrived. I wrapped my scarf tightly around my face and ears to keep warm. 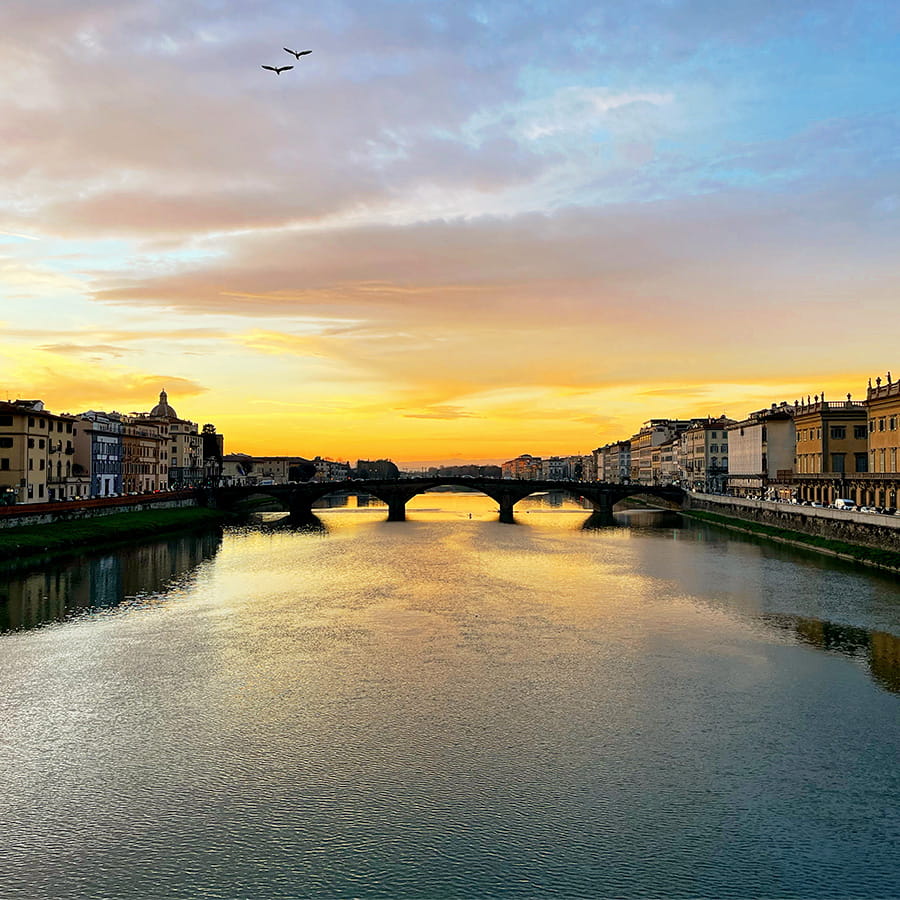 My breath slowed down as I gazed the melodious ripples on the Arno reflecting the light. As the sun drifted behind the buildings near San Frediano in Cestello, a flock of starlings fluttered across the sky like a long ribbon floating in the air.

After the sunlight no longer touched the buildings along the river, the suns glow became bolder, emphasizing the wispy clouds. I focused on the ever-changing colors along the horizon. I beamed at a pair of seagulls traveling toward the golden glow.

Bicycles clanged up and down the bumpy street as passersby paused along the bridge to take pictures. Drivers crossing the bridge looked in at least one direction: either toward the sunset or toward Ponte Vecchio. Only a handful looked both ways.

Without wanting to miss a moment of the sunset, I faced west to watch a canottiere row downstream, turn around after Ponte alla Carraia, and pass below my feet.

As the sky turned gray, the streetlights flickered, illuminating the riverscape. After the echo of Santo Spiritos bells faded, I scanned the panorama one last time, took in a deep breath, and headed home.